This breed of dog, born 2000 BC, is native to Siberia. The Chukchi, people of Palaeosiberian origin, wanted to produce a breed of dogs guarding goods and good companions of children, but above all destined for the sleigh. They achieved their goal through continuous improvement of the breed. A legend from this tribe suggests that the Husky was born from the love between the wolf and the moon. That is why on full moon evenings, the Husky and the wolf howl at the moon to bring it down to earth.
After a Russian fur trader brought nine dogs to Alaska in 1909 for the 653 km long All Alaska Sweepstakes and they took third place, a Scot impressed by their performance decided to bring in 61 others to create three teams. His dogs won the 1910 race by finishing first, second and fourth.
An animated film released in 1995 tells the true story of Balto, who, with the help of Togo, another sled dog, made the team relay from Nome, Alaska, during the diphtheria epidemic that hit this small village in the winter of 1925. This act of bravery resulted in the delivery of the serum to save lives, which earned them and their masters national notoriety.
The Husky is a pack dog with an average life expectancy of 12 years and will consider you an integral part of this pack. It is therefore suggested, if you decide to acquire this particular breed of dog, to give it a companion preferably of the same breed, because if it is not mentally stimulated, it becomes destructive. Trusting in nature, even showing blind confidence, he makes a mediocre watchdog. However, despite its joyful, gentle, friendly and child-loving nature, it is best not to let it cohabit with small animals such as ferrets, rabbits, birds and cats that have not been raised with it, as it will consider them prey. With his runaway spirit, he would need a large fenced yard, since he is not possessive and therefore could easily escape. To control this behaviour, he must, from a young age, be firmly but gently trained.
Having a medium size and firm musculature, the Siberian Husky is a working dog with specific qualities such as power, speed and endurance. This breed of dog has special features, such as a well-stocked brush tail, slightly rounded pointed ears and a triangular face highlighting its northern heredity. They usually have brown or blue eyes, however, it is not uncommon to see heterochrome eyes – which have two different coloured eyes. Its hair is double and of medium length with a thick but soft undercoat and moulting occurs twice a year, so that the Husky totally changes fur, and can last three weeks or more. At other times, they lose relatively little hair, which is why brushing its thick hair is essential. It is not necessary to groom this breed of dog, except for a good bath, equalize its tail, whiskers and hair between its pads under his paws.

Receive our offers, tips, advice and promotions by email.

Check out the latest edition
(French only) 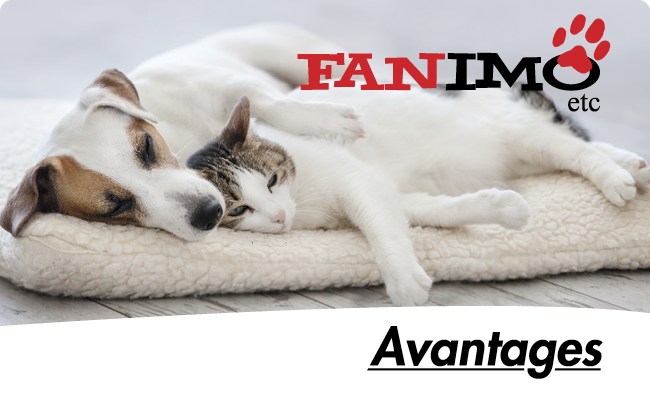